​One day in the summer of 1997 a Division of Wildlife Biologist, Gary Dowler was working on Pikes Peak. As he worked he moved further from his truck. At some point he realize he needed a piece of equipment that was still in his truck so decided to hike cross country back to this truck. On the trip he crossed a stream and noticed movement within the water. He stopped to give the stream a closer examination and after a short time was surprised to see several fish that appeared to be Greenbacks. He noted the location and continued back to his truck. 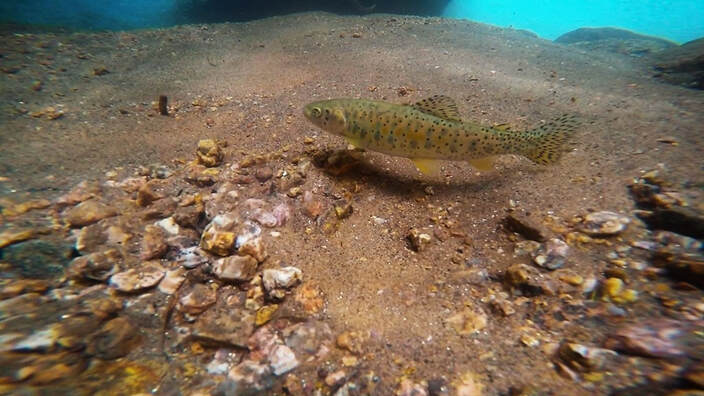 Greenback cutthroat at home in Bear Creek.
Work got in the way so it was several weeks before he was able to return with a fly rod and sampling materials to the steam, Severy Creek. Gary caught several fish and took fin samples to be sent to a laboratory for genetic testing. This event caused Gary to think that if this stream contain reminent population of this threatened species, there may be other streams with such populations. Gary did some research and discovered that there was a past genetic test on a sample taken from another area stream, Bear Creek. This sample was found to be a hybridized fish, Greenback and Rainbow cross.

Gary learned that this sample was taken low in the stream so thought he would investigate the stream at a higher elevation. He went up to a higher location on Bear Creek and took fin samples which were sent to a laboratory for genetic testing. 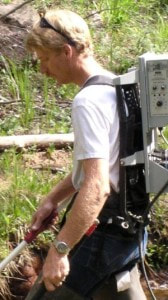 The results of the laboratory tests showed that the Severy Creek Trout indeed were genetically pure when compared to the genetics of the then population of Greenbacks that were being introduced into Colorado Streams as part of the Greenback Recovery Program. The Bear Creek samples came back as “something different”. At this point in time, a population of trout with unknown lineage. Due to this status, Bear Creek Trout are put on the back burner, the excitement is around the Severy Creek Trout as this is a new population of Greenbacks that can add genetic material to the currently limited supply. Genetic diversity increases the survival rate of any population.

A plan was developed for Severy Creek. The then current area of the stream containing the Greenback Trout consisted of about one mile. Below a natural barrier the stream contains Brook trout which have a better survival rate than Greenbacks and are not native to Colorado. The plan is to construct a new barrier two miles below the natural barrier, clean out this section of the stream of the Brook Trout and allow the Greenbacks to populate the additional two miles of the stream to improve their survival.
The barrier would be placed at the location where the stream crosses a service road that currently had a small culvert. The old culvert would be removed and replaced with a larger one. The stream at the upper end of the culvert would be widened and deepened to direct the water into the culvert and provide an overflow pathway for the water should flooding take place. The lower end of the culvert would open into a concrete structure where the water would fall onto a concrete slanted surface to create a thin fast moving water environment denying any Brook Trout an area to gain speed needed to make the jump up to the culvert entrance. In addition, the concrete structure provides for a holding tank to capture any Greenbacks that swim through the culvert and be trapped below the barrier. This tank will capture these trout w hich will be periodically captured and returned to the stream above or used to populate another stream.
Severy Creek fish barrier

​This is where CMCTU becomes involved. Funding is needed to complete this project as well as perform the hand labor required and we were approached by Doug Krieger of the CDOW to see if we could find funding for this project. CMCTU obtained $10,000.00 grant funds and provided volunteer labor. The barrier was installed in the fall of 2002 and completed in 2003. (see Severy Creek Greenback Cutthroat Protection Project 2002 Progress Report). 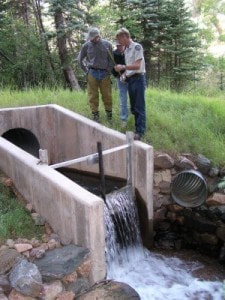 The reach of the stream between the natural barrier and the new man made barrier now needs to be cleaned of the Brook Trout. The stream is part of the water collection system for Colorado Springs, thus another political issue requires attention and special care is required in removing the trout. It was decided to use chlorine as the removal agent with representatives of the Utilities being present when the Chlorine is added. Testing down stream is also required by the Utilities to determine the diffusion of the chlorine. Several years later the steam was electro shocked to determine the success of the cleaning. Only three brook trout were found, all of which were the same age and most likely survived the treatment as eggs in the sand.
​
When these Greenback Trout were discovered in Severy Creek, the USFS closed that area, including a popular hiking trail to the public. This created a backlash from the hiking community. Here again CMCTU acted as an opposing force advocating for the closure and the reasons why with the public and politicians.

​In 2003, CMCTU chose Severy Creek and Bear Creek to become part of the Riverwatch program, a program that caused the water of these two streams to be sampled on a monthly basis and tested for heavy metals, dissolved Oxygen, Nitrogen, PH and other substances. E Coli is also tested. This sampling and testing is performed by trained volunteers from the chapter. The heavy medals testing is done by sending samples into the state water testing facility. Following the collection of these samples and testing them for three years, CMCTU applied for special designation of these two streams under the Environment Protection Act of “High Quality Water”. Don Logelin and Allyn Kratz testified before the Colorado Water Board on this issue and resulted in obtaining this designation. This protection requires that these water shall never be allowed to fall in quality below this level under the EPA. CMCTU has continued to sample these stream to monitor this quality. In addition to these chemical tests, CMCTU samples the Micro invertebrate populations of these two streams annually as another means of monitoring the water quality. This data can be obtained by going to the Riverwatch web site. As a result of this work, a representative of CMCTU attended the meetings of the Colorado Greenback Recovery Team tasked with increasing the populations of Greenbacks to the point where they can be removed from the threatened species list under the Endangered Species Act. 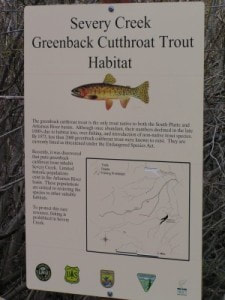 During the summer of 2006 CMCTU invited representatives of the US Forest Service and the US Fish and Game Service to hike the trails in the Bear Creek watershed to observe the erosion taking place that were creating some of the sedimentation problem in the stream. As a result of these hikes, the plan to move trails away from the stream began and CMCTU continued to work with these two agencies in advocating on behalf of the stream and the trout that reside therein.

This genetic study also brought to the forefront the uniqueness of the Bear Creek Trout. CMCTU increased it advocacy for the protection of the Bear Creek Trout and addressing the sedimentation that is the greatest threat to the survival of these trout. Our primary efforts were with the USFS and the CDOW seeking their acting on the sedimentation issue. The greatest push back came for the Motorized Single track riders as a motorized trail lead along and across the stream. The amount of sedimentation that came off that trail was enormous. As a result of this conflict of interests, it was suggested that we create a Round Table to facilitate conversation around solutions for the stream. The original Round Table was made up of representatives from CDOW, USFS, Colorado Springs Utilities, Colorado Springs Parks & Rec, the USFWS, Colorado Motorcycle Trail Riders and CMCTU. This group met regularly for about two years when the decision was made to expand the membership of the group. The agenda being to bring these other groups on board as we had already agreed must happen. The trails must be moved.

Meanwhile the unanswered question, What is a Colorado Greenback Cutthroat Trout? Continued to raise it head in any work of the recovery team so finally a plan was developed to fund another genetic study. A study to do a historical study of samples collected 150 years ago, prior to what was thought to be a time when man began moving trout around to places not considered to be native. In addition to the genetic study, a records search was also planned of the hatchery records as to where trout were planted. The funding of this study again became an issue. Colorado Trout Unlimited agreed to fund $9000.00 and CMCTU agree to put up a matching $9000.00. Additional funding was put forth by other agencies. The result of this study are put forth in Metcalf 2012. This study conclusively puts forth the data supporting the conclusion that the Bear Creek Trout are the only remaining population of the Colorado Cutthroat Greenback Trout.
Section divider type: wavesOpacity -- position: bottom

​We Need Your Help!